The Genealogy Gophers website allows you to search 40,000 genealogy books for free.  The results are from genealogy books only and include the title of the book where the information is found, and a portion of the text including your search term. We learned about this from GeneaPress.com, via ResearchBuzz.
at March 17, 2015 No comments:
Email ThisBlogThis!Share to TwitterShare to FacebookShare to Pinterest

Its March, and BillionGraves is offering those who aren't basketball fans an alternative to March Madness: a billiongraves-march-madness-competition. Prizes will be awarded for participants willing to take a large amount of gravestone photos, or produce a lot of transcriptions.

Thanks to GeneaMusings and ResearchBuzz for letting us know.
Also from BillionGraves:  a place to go to request headstone photos.

at March 11, 2015 No comments:
Email ThisBlogThis!Share to TwitterShare to FacebookShare to Pinterest

As you probably know, the Hernando Today ceased publishing at the end of November. They kindly donated to the library bound copies of the paper covering the period January 1986-June 2013.  They are available at the Main branch at 238 Howell Avenue, in downtown Brooksville. Also donated were microfilm copies of the paper for the period 2010-2014. These are located at the West Hernando branch.
In addition, the library holds old Brooksville newspapers on microfilm. These include a small number from the 1920's, most of the 1930's, and then just about everything up to the final edition of Daily Sun-Journal, published on June 17th, 1992. This microfilm is located at the West Hernando branch, along with a limited number of editions of the New York Times- a few months of each year from 1856-1963, and reels covering all of 1979 and 1980.
at March 06, 2015 No comments:
Email ThisBlogThis!Share to TwitterShare to FacebookShare to Pinterest
Newer Posts Older Posts Home
Subscribe to: Posts (Atom)

The Statue of Library- Ellis Island Foundation is a good place to start your immigration research. The link is  here  . 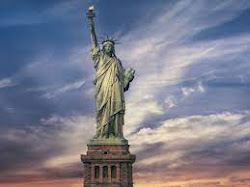 Learn about the Statue of Liberty by clicking on the photo